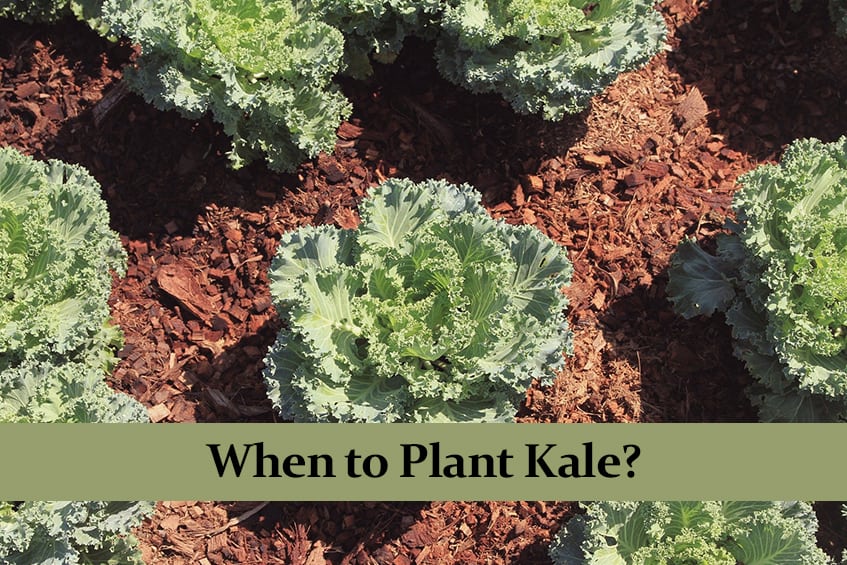 If you are interested in growing kale, below you can find out when to plant these amazing vegetables. Planting on your own is a lot healthier than buying kale in the market. It is more durable than cabbage and can withstand high temperatures and drought, just like low temperatures and frost.

This makes it ideal for growing in warmer areas where it can grow in cold without problems. Due to its biological properties, and therefore to the conditions of production, kale is similar to other cabbages and because of its relatively good resistance to high and low temperatures, it can be produced year-round but kale is a cool-season crop.

There are three main types of kale: Curly Kale, Lacinato Kale and Red Russian Kale. Each of these 3 types of kale does great in gardens when it is grown at the proper time. Kale can be sown and grown all year long, depending on the variety you plant.

Curly kale is the most common kale and it is a great choice for autumn and winter production and consumption because it can tolerate frosts up to -10 C (14 F) and short-term frosts from -15 to -20 C without major damage that would reduce the quantity or quality of your plant.

The seeds need to be planted from the beginning of spring until the middle of summer.

Outdoors it should be sown in the spring, in particular, April or May and needs to be transplanted in the first half of June.

Since it is a winter kind of kale, it could also be planted later in June.

It can tolerate some heat, but it does best in colder conditions.

You can plant it from early spring to approximately 3 months before expected fall frost. If you want to harvest in fall you can start planting in May and transplant to the garden in June or July.

The Perfect Time for Planting Kale

The time and way of planting are depending on the time of kale cultivation. Early varieties in the northern regions should be sown in February because it takes it longer to grow.

So, early kale is sown in February and transplanted in April and ripens in June.

In continental regions, early kale is sown in February and March, and transplanted in March and April.

Medium late and late kale can be sown outdoors from April to early November.

For winter cultivation it is sown in August and transplanted in September or October. Late kale is sown at the same time as late cabbage is sown, but we can plant it in the summer, too, by transplanting it outdoors in the fall, so that it arrives early in the spring for consumption.

Therefore, these vegetables are suitable for late autumn and winter consumption.

Furthermore, for early spring production, the seed must be sown in warm beds or greenhouses during November and December.

The ploughing depth is 30 cm (11-12 inches) and the ploughed furrow remains intact until spring when the soil is ready for planting seedlings.

For later planting periods, the processing is done in the so-called one stage, related to fertilization, ploughing, cultivation and flattening of the soil surface, to fill holes in the surface and eliminate depressions in which rainwater would be retained longer.

Direct seeds will mature in 55 to 75 days, while transplants will speed up the process, ready for harvest approximately 30 to 40 days.

In the preparation of the soil, as much humidified manure as possible should be added. Feeding is carried out 10 days after transplanting if the plantation has a drip irrigation system and the fertilization is done twice a week.

If classical cultivation is in the field then it is necessary to make three fertilization during cultivation. After proper fertilization, there is no problem for the final product.

The Right Temperature to Plant Kyle

Temperature also determines when to plant kale. Seeded kale with the necessary soil moisture begins to germinate at 1-5 C (33-40 F).

At an optimum temperature of 20 C, the kale seeds germinate and the plant sprouts in 5-6 days.

What is the Right Soil for Kyle

It is recommended to plant it in the ground in early autumn when the soil is still warm. Kale has very high requirements for quality soil and humus.

Kale can grow on almost any type of soil if it is deep and is well-draining.

Soils with a lighter mechanical composition, which are rapidly heated, are more favourable for spring planting. If the kale planting is to be done later, the entire soil preparation process needs to be done in one stage (fertilization, ploughing and straightening), to fill holes and remove recesses where water may be retained.

Kale is very good preparation to most vegetable crops because it leaves significant organic mass and soil with little weed or weed seeds after harvest.

Kale will grow best if it is harvested after beans, pods, peas and potatoes. Chamomile, coriander and kimono enhance its taste, and a good combination is a marigold. Other good neighbours: peas, potatoes, leeks, lettuce, spinach. Bad neighbour and pre-culture is pyrosis.

Kale is very successful in the cold because you can leave it outside in cold temperatures and it will not freeze, but it would help to cover it with some protection from the cold.

At low temperatures, the plant itself protects buds from freezing by lowering the leaves. Frozen buds need not be harvested, they are left on the plant to unfreeze. Furthermore, the kale is softer and sweeter after the first frost.

You can even harvest it under the snow! If the plants are already planted in an outdoor pot, you can simply move them in and continue to supply them with water and fertilizer.