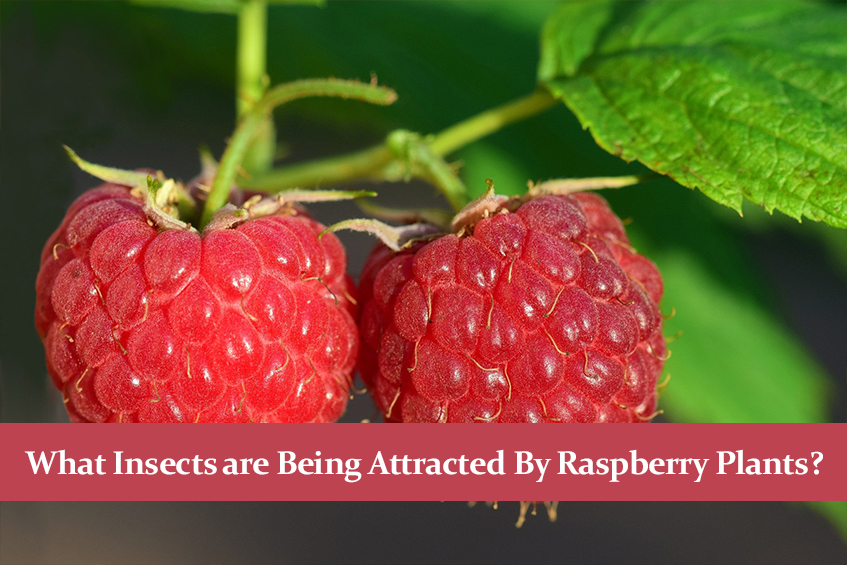 I personally don´t know anyone who doesn´t like Raspberries which is why it isn´t surprising that Raspberry Plants are often visited and plundered by animals and insects alike.

This is also why a lot of new gardeners often hesitate to plant a Raspberry bush in their garden because they think that this would attract insects or animals. This, however, isn´t necessarily true. So I decided to write this article to clarify once and for all if Raspberry plants attract insects and what you can do about that.

So if you care for your Raspberry plant properly then you can avoid attracting any insects at all.

Except for Bees but you want to have them around if you plan on harvesting your raspberry plants.

Wasps, specifically yellowjackets, can be a little annoying especially on hot days during the summer. Keeping them away from your garden is not an easy task especially if you are growing berries in your garden.

Raspberry plants are not attracting wasps directly but especially in the summer during hot days you might find that a lot of wasps are gathering on and around your raspberry plants. Most of the time they just want to eat the berries, much like you, and they need the moisture of the berries to survive. You can avoid that by harvesting the berries as soon as they are ripe.

You don´t have to fear Wasps as they are usually not aggressive. They just want to eat some of your berries but if you are allergic or if you really don´t want to be stung then I would highly recommend harvesting the ripe berries every morning.

Bees are probably one of the most important insects on our little blue planet. They are necessary to pollinate our plants and they create tasty Honey as a little side effect of that.

Raspberry plants, just like every other flowering plant, do attract Bees when they start to flower. The time when your Raspberry plant is flowering varies depending on your variant but Bees will be attracted to the flowers of the Raspberry plant and they will pollinate them. Every successfully pollinated flower will, later on, become a tasty Raspberry.

Bees will only be attracted by the flowers of the Raspberry plant and by nothing else.

There won´t be any harvest without Bees. So if you don´t like bees or if you are allergic simply stay away from the plant when it is flowering just to be sure.

While Bees are very useful for your Garden and should always be welcome Mosquitos are pretty much the opposite. No one likes them.

How to Keep Insects Away From Your Raspberry Plants?

If you are worrying that you won´t be able to protect your Raspberry plant from insect infestation then let me calm you down right away by telling you that raspberries are not easily infested by insects. Raspberries are naturally resilient and don´t need a lot of care in regards to keeping insects away from them.

But if you have a problem with a pest infestation or if you fear an insect infestation then don´t thread I will tell you exactly what you can do to protect your Raspberries.

If you are afraid of an insect infestation then there are some things that you can do to reduce the probability of an infestation.

First off, you should always prune your plant to keep it healthy and to get rid of any potential weak spots that insects could use to infest the plant.

So keep your plant clean from any dried or damaged leaves and stems by pruning it regularly.

You should also pick off any caterpillars or grubs that you find on your plant as they will probably feet on it. But don´t kill them right away you never know what will become of them. I usually put them in a corner of my garden where they can´t do any harm.

And the last thing is a protective mulch that will keep insects away.

I personally use cedar mulch to keep insects away. It is a natural repellent for all sorts of insects. YOu can buy it on Amazon right here or at your local garden center.

Now that we covered insects one logical follow-up question I usually get is: How about animals?

In my garden, we have a bunch of raspberry plants close to a wall and we had quite some problems with a mice infestation. I don´t care about birds, they don´t harm my plants and they pretty to look at but mice burrow underground and tend to eat more than just berries after a while.

But I didn´t want to use poison to get rid of them so instead, I started to harvest my berry bushes every morning and evening in order to avoid feeding the mice further.

It took about one month and almost all of the mice were gone. They didn´t have anything to eat anymore so they simply moved on.

Ever since that, I started harvesting my plants regularly. You don´t have to do it daily but you should harvest your plants every two to three days in order to keep undesirable animals away.