How to Easily Grow Cinnamon at Home in a Container 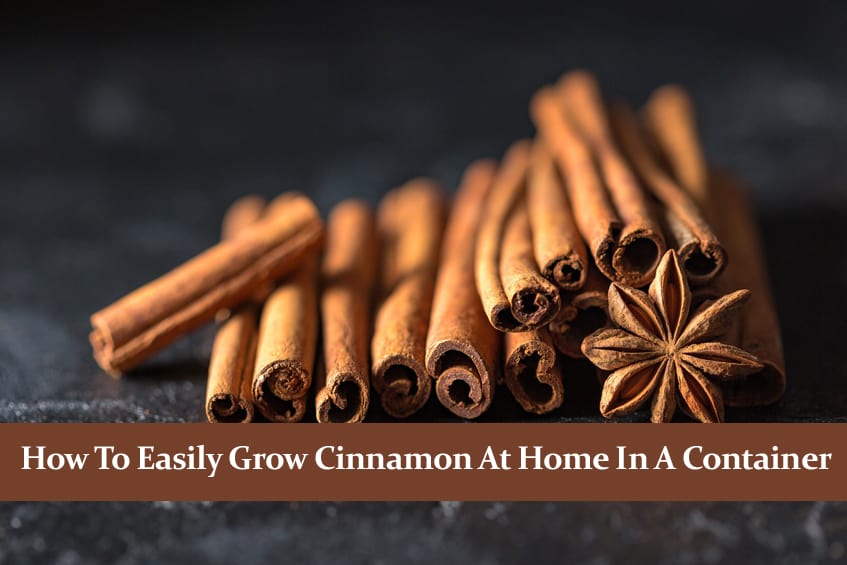 In this article, I will tell you everything, that you need to know to grow your very own cinnamon plant at home in a Container.

You will learn everything from choosing the right container for the plant to using the right kind of soil and how to properly care for your cinnamon plant.

Important to know before we start: A Cinnamon plants need to be at least two years old before you can harvest something from them. Because only after the bark has turned brown and the plant has become strong and big enough, only then you will be able to harvest it. So keep that in mind!

So let´s start and firstly take a closer look at the different varieties of Cinamon.

What Cinnamon Varieties Are There?

Cinnamon has hundreds of varies, but only four are grown commercially. These varieties are divided into two groups:

Only one variety of Ceylon cinnamon is used commercially while three varieties of cassia cinnamon are of commercial value. They include:

Cinnamon grows best in warm regions with high humidity; it’s a tropical plant. The average temperature for growing this plant is around 27°C (80.6°F).

Cinnamon is mainly propagated from seeds though some people may propagate it via vegetative means.

If you wish to get seeds from your cinnamon trees it’s necessary to bag them to prevent attacks from birds.

Seeds should be selected from vibrant trees with the desired bark characteristics.

Air layering and cuttings are the vegetative ways of propagating cinnamon, but they are not very commonly used; seeds are preferred for raising cinnamon plants.

Collect seeds from the fruit pulp, wash and dry them preferably in the shade. You can raise your seedlings in a nursery or in polythene bags with high-quality potting soil mixed with compost or aged manure. These seeds beds should be shaded and kept moist.

The seeds need to be planted at a depth of an inch (1.5 cm) in the pot or polythene bag.

After 3 months in the nursery, the seedlings are ready for transplanting.

If you find it challenging to raise seedlings, you can purchase ready seedlings from a reputable commercial nursery in your local store.

Selecting The Right Kind Of Container For Your Cinnamon Plant

When transplanting cinnamon into a pot, you need to make sure the pot is large enough to support the plant to maturity.

If the container is large enough to support root development, growing cinnamon in pots becomes easier.

Additionally, the pot should have sufficient drainage holes. Glazed pots are preferred for cinnamon plants since they need less watering.

How Much Sunlight Does My Cinnamon Plant Need?

As we had seen before, the cinnamon tree thrives in full sunlight.

You need to place your containers in a place that receives sufficient sunlight during the day or in a bright & sunny greenhouse.

The plants need a spot where they will get 12 hours of direct sunlight.

What Soil Does A Cinnamon Plant Need?

If your cinnamon plants are exposed to waterlogging, they may die due to root rot.

The best soil mixture for these plants is perlite and sand for proper drainage.

Alternatively, to prepare a suitable potting soil for your plants, mix high-quality compost or aged manure with sand peat moss or coco peat.

If you use coco peat in your potting mix, you need to be careful to avoid oversoaking. Remember soggy soil isn’t ideal for cinnamon plants.

It’s advisable to use self-watering pots or glazed pots for your cinnamon.

When I doubt of your soil pH, you can purchase a pH testing kit from your local agriculture supply store or nursery and test the soil’s pH.

How To Fertilize Your Cinnamon Plants

Cinnamon plants are needed to be supplied with sufficient nutrients, especially when grown in pots.

Fertilize your cinnamon plants for healthy growth and to prevent attacks and diseases. It’s thus essential to make sure you start your plant in fertile potting soil.

Fish- based fertilizers are perfect for cinnamon since this is a foliage plant not primarily a fruiting plant.

During winter, plant growth slows down, thus the need to reduce fertilizing at this season. You need to add compost or aged manure to your pot twice or thrice in a year.

You need to fertilize your cinnamon at the same time you’re watering the plant so that the trees can utilize the fertilizer.

Fertilizing your cinnamon will ensure you get a substantial crop. When suing rhea fertilizers, read and follow the instructions in the package to avoid killing or burning the tree.

How To Correctly Water Your Cinnamon Tree

The frequency of watering your cinnamon trees depends on the season.

For example, your plants will require more water during summer and less water in winter. When watering your cinnamon, ensure the pot is soaked lightly with water and don’t water the tree until the upper 2 inches of the soil in the pot is dry.

Avoid overwatering since this will create the right conditions for diseases that can kill the plant — root rot results in waterlogged pots.

Pests And Diseases That Could Befall Cinnamon

Although cinnamon trees are considered hardy plants that have insect-repelling abilities, these plants also suffer attacks form a variety of pests and diseases.

For example, you need to scout for pest such as the mealy bugs; if you see these pests, you should spray the cinnamon trees with a neem solution and repeat the treatment after a week to completely eradicate the pests.

Pests can lead to significant damage to young cinnamon stems and bark, use authorized insecticides to eradicate the pest.

If your plants are affected by borers, you need to spray your insecticide when they pest are laying their eggs.

When you spray when larvae are beneath the bark, the pesticide may not be effective in eliminating the pest. If you want to keep pests from your cinnamon trees, avoid mulching and vegetation at the base of the plant.

The bark is the most important part of the cinnamon plant; thus, you must select insecticides carefully. You can use biological control of pest by introducing weaver ant colonies since this ant act as predators of a majority of pests, thus safeguarding your cinnamon trees.

Use recommended fungicides to control leaf spot. As for bark disease, you’ll need to remove and destroy the affected branches or seedlings. You may also implement selective pruning to control the diseases. Additionally, make sure your plant is healthy and adequately fertilized to prevent diseases.

Pruning is helpful for cinnamon trees.

After around 2 years, you need to cut back the primary stems alternately.

With a sharp knife, cut the stems to a height of approximately 1.6-2.4 inches at an angle of 30 degrees in the inward direction.

When you cut cinnamon stems at this angle you enable the plant to spread outwards; additionally, each base of the cinnamon plant will shot three new healthy stems. This will increase the number of stems you’ll harvest from the plant.

You also need to cut the side branches from the primary stem to promote vigorous growth after exposing the tree’s base to sunlight.

Harvesting cinnamon should start when the plants are at least 2 years old.

The cinnamon trees are ready for harvesting when the leaves seem to be firm, and the bark has turned brown.

It’s recommended to harvest cinnamon branches that have attained a diameter of ½- 2 inches (1.2-5.0 cm).

When harvesting, select 4-6 straight, healthy stems from each plant and use a fine-toothed saw to cut the stems to sizes of about 1.5 to 2.5 inches (3.8 to 6.4 cm). The cuts should be at an angle of 30 degrees slanting inwards.

From each stem score, the bark using a sharp knife. The knife will assist you to split the bark lengthwise.

You can now, peel off the bark from the stems using your fingers or a knife.

After peeling the bark from the stems, dry them in the shade for 4-5 days. The bark will naturally curl up on its own upon peeling. These are your cinnamon sticks.

Avoid drying the cinnamon sticks in the sun since this will destroy the flavor. Before storing your cinnamon stick, you must ensure they are perfectly dried; but a week is sufficient to dry these cinnamon barks.

You can now use the ground cinnamon for your tea. Always ensure the containers are closed tightly to maintain the freshness and flavor.

I am a passionate gardener. I am growing my own plants at home and in a small garden for about five years now. Here on this site, I am sharing all my knowledge and more for everyone who is interested in gardening! I hope you enjoy my site and I hope you find it useful. Here is a link to the full bio of the author if you want to know more: https://greenthumb-central.com/about-valentin/