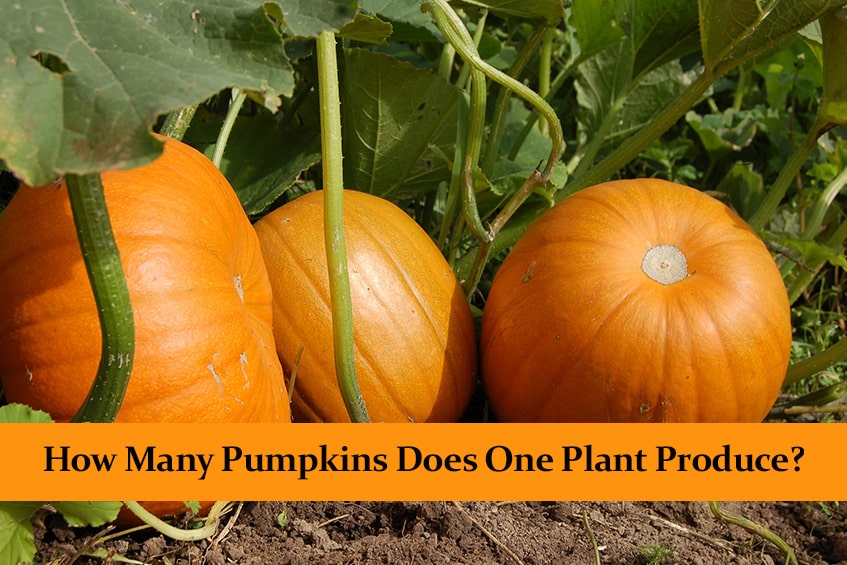 Pumpkins are very tasty, healthy and great for so many things, like carving your own jack-o-lantern. But Pumpkin plants can grow quite big and so the question arises if it is even worth it to grow such a big plant to potentially only get one pumpkin.

So how many pumpkins does one plant produce? In short, the number of pumpkins that you can get from a single plant varies depending on the variety of pumpkins. The average pumpkin plant can give you 2 to 5 pumpkins, whereas the miniature varieties can give you as many as 12 per plant. Larger varieties may only yield 1 or 2 pumpkins.

Some pumpkins can take more effort to grow than others. Smaller varieties of pumpkin don’t need as much space or resources, whereas larger ones need more room to grow and need proper irrigation, seeding, and soil.

What Pumpkin Variant Does Produce the Most Pumpkins?

Smaller variants of pumpkins will give you the most to harvest, such as the Jack B Little variety that fits in the palm of your hands.

This is a vine variety of pumpkin that takes up to 100 days to mature and will give you up to 12 pumpkins.

They are much easier to care for and grow and are considered to be very productive. Other vine varieties include the Munchkin and the We-B-Little.

What Can I Do to Increase the Number of Pumpkins a Plant Produces?

While the average variety of pumpkin can give you 2 to 5 per plant, there are ways to extend that yield through a process called “branching”.

When the vines have reached a length of 2 feet, you need to go to the main vine and pinch out the tips.

Another way to get more pumpkins is by removing the flowers that have small bulbs or “swelling” at their base. These are the female flowers and you will need to remove these during the first three weeks of growing.

Your target amount depends on your reason for growing your pumpkins. Let’s say you want to grow one of the giant varieties of pumpkin, like the Dill Atlantic variety.

For the best pumpkin, you would focus all resources on just that one pumpkin. For your everyday sized pumpkin, such as the Cinderella variety, you will get the best pumpkins if you aim for growing 2 per plant.

The main thing to remember is that you don’t want to overcrowd your pumpkin plants and have them competing for resources. A general rule for average pumpkin growing is 3 per plant. If you go beyond this, things get a bit crowded and you may not get the best quality of pumpkin to come harvest time.

The biggest factor in pumpkin growing is the vines. Vines need toom to climb, run, grow, and breathe. So, the more pumpkins you have per plant, the more room the vines will need. If pumpkins are overcrowded, resources become more scarce and you could end up starving all of the pumpkins on a vine.

How Much Space Should You Give Your Pumpkins?

Regardless of the variety of pumpkin plants you choose to grow, you will need plenty of room for them.

With the giant and larger varieties of pumpkin, you will need at least an area of 70 square feet for each plant.

This allows the pumpkin to reach its biggest size.

The medium-sized pumpkin varieties, such as the ones you would use to carve jack-o-lanterns, require at least 5-feet between each pumpkin plant, with rows being at least 4-feet apart.

Your miniature and small varieties of pumpkin only need 2 or 3-feet of space between each of the pumpkin plants, but rows will need at least 6-feet or more between each other)

Tip: Pumpkins are made up of 90% water. To make sure you get a good yield of pumpkins, you need to give them a lot of water.

Getting the spacing between each row of pumpkin is a necessity if you want to successfully grow your pumpkins and get the most yield from them.

A pumpkin vine can reach 20 or more feet in length, so you need to provide the space for them to grow. Remember, the vine is like the umbilical cord to a pumpkin. It delivers nutrients that help the pumpkin grow healthy and strong. If the vine dies or is damaged, the pumpkins won’t get those nutrients and will die off.

Young vines can be directed towards the area you want them to grow in. Once a vine starts to flower, however, you will need to let them be or risk damaging the vine. If you’re growing a small variety of pumpkin, the vines can be trained to grow on a trellis.

Pumpkins need to be planted when there is no danger of frost and the soil has warmed considerably, usually around May. They need a lot of sunlight, so make sure you choose a sunny area to plant them.

They grow the best when started from seeds planted directly into the ground. However, if your growing season is a short one, you can start your pumpkin seeds indoors, about 2 to 4 weeks before moving them outside, using peat pots.

Pumpkins seeds or transplants are grown using mounds. You should use 3 to 5 seeds for each mound and have a distance of up to 4 to 6 feet between the mounds. The distance between rows will vary depending on the variety. For miniature varieties, you will need to have your rows at least 5-inches apart. Normal-sized pumpkins will need rows that have at least 12-inches between them.

When you are the earlier part of the growing season, protect your pumpkin plants with row covers so you don’t develop pest problems. Once the pumpkin has started to flower, remove the covers to allow for pollination.

Pumpkins require a lot of water, at least an inch of water every week. You will need to water them deeply but take care to keep the pumpkin fruit and foliage dry.

Excess dampness can lead to rotting. You can help lock moisture in by adding mulch around each pumpkin. This will also deter pests and suppress any weeds.

Give Your Pumpkins a Boost

Pumpkins, in general, are heavy feeders.

This means you will need to regularly give them manure fertilizer or a mix of compost and water for them to grow healthy and strong.

Fertilizer needs to be high in nitrogen especially in the early stages of plant growth. You should fertilize the plants when they have reached a foot high and right before the vines start to spread and run. Right before the flowers bloom on pumpkins, switch your fertilizer to one that phosphorous rich.

Once a few pumpkins have started to form on each vine, its best to pinch the fuzzy end of the vine off to avoid crowding. If you want your pumpkins to have a nice, even shape, gently turn them as they develop.

Tip: to avoid any damage from insects and decay, place heavy grade cardboard or thin board under the pumpkins that are ripening.

How to Improve Chances of Growing Pumpkins

You may have tried to grow your first crop of pumpkin but found that no pumpkins have formed after they have flowered.

The main issues are usually down to pollination. Pumpkins need the help of bees to pollinate the male and female flowers. You can try to plant some bee attracting herbs and plants close by if a lack of bees seems to be an issue.

The best plants to use are rosemary, nasturtiums, oregano, and borage. You can also let some vegetable flowers, such as carrots and radishes, to entice bees in to pollinate your pumpkins.

Things that you should avoid planting to close to your pumpkins are any root vegetables, like potatoes, onions, and beets. The roots of pumpkins are quite sensitive and these can disturb the roots.

Avoid planting root crops, such as beets, onions, and potatoes, near pumpkins, which may disturb sensitive pumpkin roots when harvested.