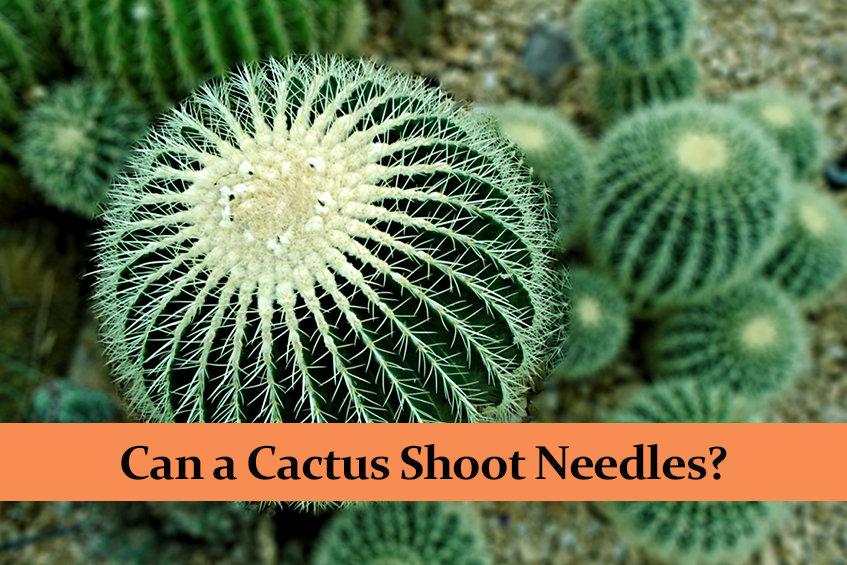 One of the first plants that I ever owned was a cactus and I was very careful with it because I was worried that it could prick me especially because my cactus grew fast and after only one year it had very respectable and dangerous-looking needles.

Around the same time, I started playing Final Fantasy 7 and I encountered quite a few needle shooting cacti as enemies in that game which made me wonder if there are real live cacti out there that could actually shoot needles.

So I did a lot of research and eventually, I found an answer.

There are no Cacti that can shoot needles. Even the jumping cholla (pronounced „Choy-a“) does not shoot its needles. The needles are just very loosely connected to the cactus, detach easily from it, and attach easily to skin or clothing. Parts of the Cactus can also be picked up by gusts of wind and flung around which all adds to the myth that the jumping cholla shoots needles.

So there really isn´t a cactus in this world, that we know of, that actually shoots needles.

And it wouldn´t make sense for a cactus to shoot needles. A cactus only has ist needles for defensive purposes.

It doesn´t hunt or has to defend a large area around it. It only needs to defend itself from predators that come near it.

So a cactus will only either have thick strong needles that are attached strongly to the cactus or it has thinner needles that easily detach on the slightest touch or it has very thin needles that detach as well but are almost invisible to the naked eye and are usually perceived as web-like structures on top or around the cactus.

The Jumping Cholla Does Not Shoot Its Needles

But that is actually incorrect.

The Jumping Cholla does not actually shoot its needles. Instead, the needles are only very loosely attached to the Cactus itself and they easily detach on the slightest touch. It is more than enough to lightly touch a needle of the jumping cholla to have it embed itself in your skin or clothing.

The Jumping Cholla only gives the illusion of actually shooting its needles because they detach so easily from the cactus and because they attach so very easily to anything that touched it.

The Jumping cholla also separates parts o fit that then lay on the ground.

These small parts can be so light that a gust of wind could pick them up and fling them at you. This also added to the myth that the jumping cholla can shoot parts of it and needles at unsuspecting people and wildlife.

But the cactus itself doesn´t shoot any needles what so ever.

Where Does the Myth of Cacti Shooting Needles Come From?

It is kind of hard to say where exactly the myth of cacti shooting needles originated but there are quite a few possibilities.

As I already mentioned above, the jumping cholla is one possible origin of this myth.

Because of its easily detachable needles and because wind gusts can fling these needles or parts of the cactus around it is quite safe to assume that people who witnessed this happening may think that the cactus itself shot the needle.

Other Cacti With Thin Needles

There are also other cacti that have very thin needles that can easily detach.

Some Cacti variants actually have needles that are so thin that they look more hair or spider web than actual needles.

Sometimes you can’t even see them properly.

So I imagine that quite a few people were confused when they accidentally touched one of the needles and got it stuck in their skin when they were sure that they didn’t actually get close enough to the Cactus to get hurt by its needles.

So they might have assumed that the cactus shot the needle at them.

Final Fantasy as one Possible Origin of This Myth

I mentioned in the intro of this article that I personally got worried that cacti can shoot needles after playing Final Fantasy 7.

I think that this might very well be a possible origin of this myth as well.

In almost every Final Fantasy game there is a cactus-like monster that can shoot needles at you as an attack.

This might be inspired by the jumping cholla but I think that it was just a „logical“ attack such a monster could have and so the developers simply gave it that ability.

The ability and the monster itself got so famous that ever since the first time the monster was introduced in almost every following title of the series the Cactus monster that is shooting needles could be found in one way or another.

In the end, we can´t say for sure where the myth came from but we can differently say, that it is just a myth and there really is no Cactus, that we know of, that can actually shoot its needles in any way what so ever.

So if you have Cacti at home or if you are visiting or live near an area where lots of Cacti grow then don´t worry. They won´t harm you as long as you don´t come too close to them.

And maybe don´t go for a walk near any cacti when the wind is strong outside just to be safe.