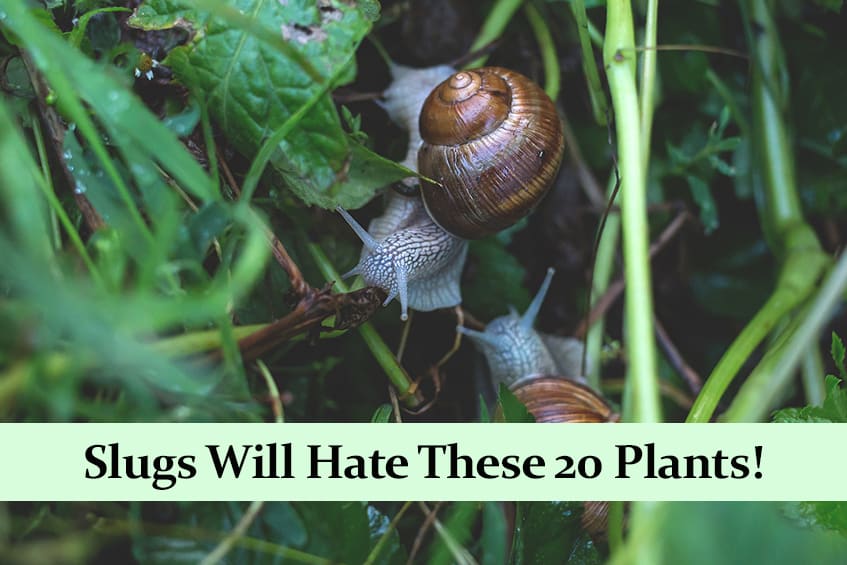 Slugs won’t be a fan, but your garden will flourish

Slugs are usually a crucial part of the garden ecosystem but sometimes the pests just aren’t welcome. Twenty plants listed below will give the slugs a kiss goodbye.

The Iris plant blooms in late spring or early summer. Irises grow from a bulb and are used commercially for products that are fragrances. They typically have 6 petals, 3 that fall down and 3 that stick straight up.

Irises are slightly poisonous for humans and animals. Although not fatal, some people claim to be super sensitive to this plant though.

The daffodil is often recognized by its bright yellow petals and a cup-like middle portion that holds pollen. Daffodils contain a sap that is highly poisonous to other plants.

If you intend to place in a bouquet with other flowers make sure they are soaked in water for 24 hours to remove sap. Daffodils hold up rather well in the cold, so they are a great pick in cold weathered areas.

They are also one of the easiest flowers to grow. While it is not a state flower for any of the states, it is a great generic pick for any garden.

Many people view tulips as one of the most beautiful flowers in the world. They come in a variety of bright and warm colors. They take their name due to the nature of the pedals and are a member of the lily family.

Sometimes tulips are used in the place of onions for culinary dishes since the bulb and petals are edible. Many associate tulips with the country of the Netherlands since they are the main exporter.

The best time to plant a tulip is in the fall so the roots have time to settle before winter.

Geraniums are considered a low maintenance plant and you will see them many times lining walkways or shops. Geraniums bloom from late spring all the way into the fall.

They flourish in bright and sunny weather but not too hot or they sizzle up. These plants are known for doing the best when potted, That is why they are often a high selling point at plant nurseries.

They come in a variety of colors and are known for their heavy fragrance.

Ferns are the elders of the plant world with more than 10,000 species to date and more to be discovered. Ferns do not rely on seeds to reproduce or flower. They have spores deep down which open up and spray allowing to be carried by the wind to replant. Ferns are often easy on the eyes and used as instant home decor.

Ferns can flourish in highly dense and wet environments which make them an easy spot in forests. they are known for their long leaves called fronds that have a feather-like structure.

They can absorb nitrogen in the air and are used for air pollution prevention.

Catmint is known for being extremely versatile and easy to grow. If you have a sun you can have yourself some catmint. The plant itself blooms in early summer and is rich purple in color.

Catmint not only stands up to slugs but can stand up to deer as well. This plant is often confused for catnip which is a fun treat for anyone with a feline friend.

Along with the fun name, these plants are tough when it comes to being able to grow in any condition and are a great asset to any garden.

I am sure we all are familiar with the common rose we see so often in stores around Valentine’s day or any bouquet of flowers. While roses are some of the most recognizable flowers they do come with some pretty great perks.

Roses come in all colors but black will never be one of them. Rosehip is often used in many facial and beauty products due to its high vitamin c content. Rosebuds are often adorned with pricks and thorns on their stems so be careful. If taken care of, roses can last a long time even when given as a gift.

Sometimes you will hear of a rose slug that loves munching on the beautiful flower. However, this slug is not actually a slug at all, more of like a caterpillar instead.

Yucca plants are often found in the southwest part of North America and various parts of Mexico. They love hot and arid climates, which is why a desert climate is where they are often found.

Yucca leaves closely resemble palm tree leaves. They bloom during the spring and late summer and are a member of the asparagus family. Yucca root can be used in many culinary dishes. Breweries can foam yucca and use it in various cocktails.

While you won’t see a slug munching on them, you will see them as the state flower of New Mexico.

Yucca plants are pollinated heavily due to the yucca moth who pollinates and lays eggs at the same time.

Hydrangeas bloom in early spring to late fall. This is one of the few plants that actually accumulate aluminum which gives them their blue hue. They are easy to grow in well-drained soil and need to be pruned quite often. Hydrangeas are often seen as the grandmother’s old-time flower.

They bloom in bunches which give them a disco ball type formation. They are not edible and can be somewhat toxic. They are very thirsty and need lots and lots of water.

If you are a super fan, there is an American society you can join for all lovers of this plant.

As the name implies, lamb’s ear is shaped like the ear of the fluffy barn animal and are velvet to the touch. These plants are often used to decorate recreational buildings due to their fun appearance.

The plant can be divided up to better grow in soil and excess water is a foe to the plant. They have been known to have medicinal and antiseptic values.

This makes them an easy use for wound care and herbal use.

Spurge can stand up to many pesticides and are not a popular pick to insects due to the toxic substance it produces. The flowers of this plant are small and yellowish/green in color.

These plants often share their soil with neighboring fungi. The only known enemy to eat the plant is known as the flea beetle.

The sap of the plant with exposure causes itching and skin swelling.

Wormwood comes from the daisy family. It is often spotted near cliffs and riverbanks.

The branches of the plant are silvery grey in color and the leaves are greenish-grey. Wormwood is often used to treat gastrointestinal disorders. It is one of the main ingredients used in the alcoholic drink called absinthe which is banned in most places.

Heuchera is a traditional foliage plant. The flowers are bell-shaped and often attract hummingbirds.

They are native to North America and often are found in woodlands and rock gardens. They grow best in full sun or partial shade.

Daylily’s are found in eastern Asia and central Europe. They have fleshy roots and sword-shaped leaves.

The flower itself comes to a tragic end and only lasts 24 hours before it is withered and replaced. They come in all colors and are often vibrant. The name comes from the Greeks meaning beautiful day.

Phlox flowers are a favorite of butterflies and bloom in intense flourishes. They are considered easy plants with very low maintenance. They do need their space and make sure to allow for 12 to 24 inches in between each to flourish.

They are available in red, pink, blue and white and are often used in bouquets. They are native to North America.

Peonies are a part of their own family and flourish in colder climates.

Peony is a larger flower with great blooming petals. They bloom from late spring into early summer. Ants are highly attracted to the plant due to its nectar and are prime support for the pollination of the plant.

The peony is one of the most popular of all flowers used at weddings. The peony is the state flower of Indiana.

Lavender is one of the most widely used scents across all items and especially essential oils. Lavender grows in floral stalks and is colored as blue or purple hues. Lavender is associated with the feeling of being calm.

Numerous pests can’t stand the smell of lavender and the scent is used primarily for that reason. Lavender has antiseptic, antibacterial, and antidepressant properties. The flower is often used in teas and sweets.

It is also referred to as a natural insecticide.

Rosemary is native to the Mediterranean coast. It is not cold friendly or high humidity tolerant. Rosemary is used primarily as a spice and used in various dishes.

Rosemary has needle-like evergreen leaves. It is often used in aromatherapy as well. Rosemary can withstand excessive water and the oil from rosemary can sometimes be toxic at a high dosage.

Euphorbias are very closely related to the spurge plants. They do better with seeds first planted in pots and then transferred into the soil. They often hold up tough and have very few problems when growing.

They are drought and heat tolerant. People often use them to border rocks and gardens due to their lush colors and low maintenance.

Anemones come in all shapes and sizes and are often saw as the prettiest of flowers.

They bloom anytime from spring all the way to the fall. They require partial shade, general watering and can be grown in containers. They make a good choice for backyards since deer stay far away.

There are over 120 species and they primarily grow in North America, Europe, and Japan. They are sometimes used in medicine to treat cramps.

There you have it, 20 plants slugs give a 0-star rating to!