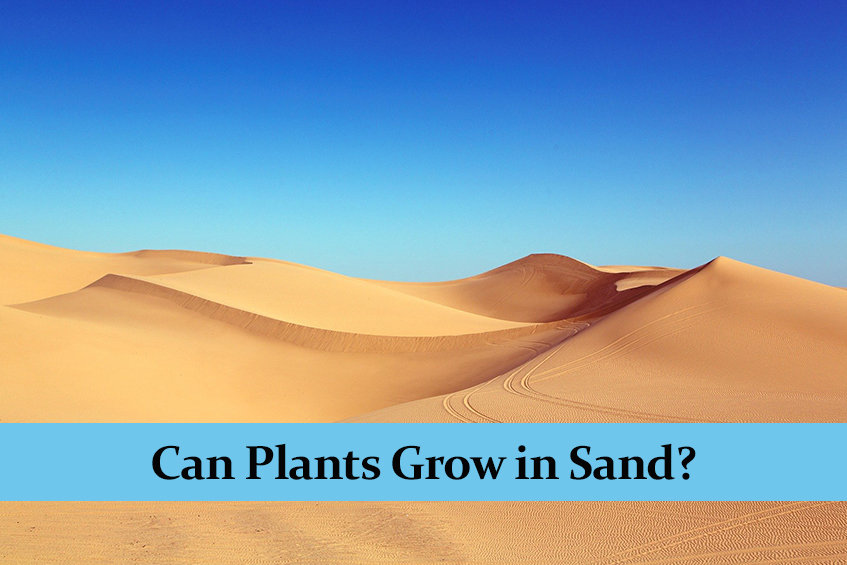 We all know, that there is a vast variety of plants but almost all of them grow in some kind of soil so naturally a lot of people ask themselves if there are plants, that can grow in sand? And do they grow well in sand?

So can plants Grow in Sand? The short answer is yes, there are quite a few plants, other than cacti, that grow in sand. In Nature pure sand with no mud or organic matter mixed in is very very rare. So In Nature, no plant growing in sand is really truly growing in pure sand.

Why Can Some Plants Grow in Sand and Some Cannot

The higher the sand content of the soil the more easily nutrients are washed out of it by rain.

Therefore plants that grow in sand tend to be those which have the ability to quickly absorb water in quantities sufficient to maintain life and hold onto it by storage.

This is particularly true of desert plants, which often have the capacity to retain water. Some desert plants have developed thin leaves called spines that retain water in the plant by preventing evaporation because their thin surfaces do not lose water as easily as broader leaf surfaces do.

There is also the fact that plants that grow well in the sand have strong roots that enable the plant to hold on in strong winds because sand is a loose soil medium that does not provide a good grip for the roots to take hold.

There are different kinds of sand. Sand is fragments of weathered rock, so as the bedrock from which it is weathered differs, so does the sand.

Many grains of sand contain quartz fragments, which are acidic, but in New Zealand, there are black sands weathered from basalt. These are alkaline.

Some plants cannot grow in the sand as they need a nutrient-rich soil, which sand does not provide.

Do They Need the Same Amount of Water as Other Plants?

Yes, their water requirements are the same as those of other plants. However, as sand drains quickly its water content needs regular replenishment.

What are the Advantages of Sand

The Royal Horticultural Society, the world’s leading gardening organization, presents some advantages of growing plants in sand. While the sand provides no plant nutrients, it can anchor the plants well.

It does not provide a home for pernicious, invasive weeds as richer soils do. It warms up easily in spring and is easy to dig. It is easier to dig than a clay soil is, and sand warms up quicker in spring than cold, heavy clay does.

The RHS advises that to grow in a sand dig in compost or another organic substance, such as manure or leaf mold, water well and then cover the sand with an organic mulch such as straw or seaweed. You must realize that sand alone is not enough, you need humus and plant nutrients. The sand serves as a neutral growing medium that anchors the roots.

If you are growing in sand-filled containers follow the advice in the previous paragraph, and remember that as containers are prone to dry out, the organic material will help to retain water.

Sand has been used in the Middle East for thousands of years. It is said that the famous Hanging Gardens of Babylon used sand to anchor their plants in their pots.

Moreover, the Aztecs are said to have practiced a form of cultivation on sand-covered rafts floating on lakes. Here they grew beans and squash [zucchini.] The famous cliff farmers of Branscombe, farmer-fishermen who cultivated plots on the crumbling sandy cliffs of Devon, England, produced many vegetables in very sandy soil.

Moreover, sand has been used as a medium for hydroponic cultivation and was one of the earliest hydroponic growing media. It is said to have advantages over gravel as the closeness of its particles anchor roots better than gravel does and allows for capillary movement of water both vertically and horizontally. Sand is also an inexpensive growing medium. This makes it ideal for home-based hydroponic systems.

What Is a Hydroponic Growing System?

Hydroponics works on the principle that soil has two functions.

It stores and releases plant nutrients and it anchors the roots. In natural soils, the two functions are provided by the one soil. In hydroponics, the anchoring function is provided by an inert growing medium, such as sand, Rockwool or gravel, and the nutrients provided by a liquid chemically composed of all the nutrients that the plant requires.

In advanced systems, the supply of nutrients is controlled by the computer and delivered by a pump through pipes.

A Simple Sand Based Hydroponic System

This is low tech hydroponics using sand. You need two pots, one larger than the other, but the larger without holes in the bottom. That is the flower pot. If you need to make holes in the smaller one, you must have a drill.

You need some sand, a large wick, three small flat blocks of stone or wood and some nutrient solution, purchasable from a hydroponic store. You may be able to get the wick from the store as well. Push and pull the wick through the hole so that some are in the flower pot, but a long section in the smaller pot.

Then put your plant in it, firming it in well by pressing down the sand around the stem. The final stage is to pour your nutrient solution into the larger pot. Make sure that you keep it topped up.

The wick will use capillary action to draw up moisture into the sand, where it will be available to be absorbed by the roots.

What Plants Grow Well in Sand.

1: Any member of the beet family grows in sand. Beetroot and its relative’s sugar beet and chard descend from sea beet, Beta vulgaris Maritima. This is a kind of plant with much genetic variability that grows on beaches of Europe, North Africa, and South Asia. I have seen it growing in North Wales on a beach of sand and mud.

2: Carrots love sand, but while they can cope with a moderate soil fertility level, they need fertilizer. The varieties of carrot that we eat originated in the desert lands of Afghanistan, so they evolved to cope with poor soil. Here is a good technique with carrots, if you want to grow in sand. Fill your pot with a layer of compost at the bottom covered with moist sand, but have a tube reaching to the bottom of the pot. Pour water and nutrients down the tube, but do not flood the pot. Sow your seeds on top of the sand. The carrot will send out its long root seeking out water. When it finds water and its nutrients this root will begin to swell and if you feed it well enough you can get long carrots. Moreover, in sand there are no stones that can obstruct the root and cause it to fork.

3: Radishes will grow on sand, but like all vegetables need fertilizer.

4: Lettuce is a plant originating in dry Mediterranean soils and it copes well on sand and sandy soil.

5: Several members of Brassicas, such as collard greens and mustard, will grow on sand, but they need fertilizer. I have seen cabbage [ a Brassica] growing wild on a clifftop, but not on a beach, and as it is a heavy feeder it would be hard to grow it on the sand. It is also large and prone to rock in strong winds if it is not firmly rooted. The same problem occurs with Brussels sprouts.

6: Potatoes were grown on the sandy cliffs by the cliff farmers of Branscombe. These hardy vegetables took root in the soil and grew despite the rough conditions. As the potato originated in the mountains of the Andes it can cope with difficult soils. The cliff farmers fertilized their potatoes with seaweed, just as the Irish used to do in their potato beds, known as lazy beds. Potatoes in sandy soil need feeding.

7: Tomatoes are related to potatoes and are often grown in hydroponic conditions, so with proper feeding they will grow in sand.

8: Zucchini and beans grew on sand rafts in Aztec culture, but clearly they require extra nourishment.

It should now be clear that pure sand alone cannot support plants and that a nutrient source is needed. It is also important to say that in nature pure sand is only found in barren deserts. In most situations plants cope with a mixture of sand, stones and some soil. So what about ornamental plants for your garden or patio. Are there any that will grow in sand?

When we speak of plants that like sand many people think of cactus.

But this is not strictly true, because cactus is a plant whose habitat is a stony desert made up of gravelly fragments. Cactus sand is a special mixture of sharp gravel, sand, some soil and a little amount of moss, which provides organic matter and helps to retain water. If you want cactus as an ornamental, purchase special cactus sand.

Succulents are also desert plants that need to grow in a desert soil that includes fifty percent inorganic material. Most mixtures use an artificial substance known as perlite, but you can replace perlite with sand and gravel.

Heath is a habitat common across the world. Heaths are low nutrient, acidic soils often with a high component of sand. A plant common on sandy heaths is Calluna, one of the three kinds of heather.

This is used as an ornamental in cooler climates. It is often grown in containers. To grow calluna you need a mixture of sandy soil with some ericaceous compost. This is an acidic compost named after Erica, one of the kinds of heather. Lavandula, lavender, will grow on sandy soil with a slightly alkaline pH.

Beach plants have evolved for sandy conditions and can be grown in your garden. I have seen sea holly, with its lovely blue flowers, growing on sand dunes in North Wales and also cultivated in a nearby garden. Rosmarina Officinalis is a shrub that grows on sandy soils. You may like to know that the species name officinalis shows that the plant was used by herbalists. Echium vulgare, whose common name is viper’s bugloss, also grows on sandy soils.

It is found on and dunes and beaches in Europe. It has attractive blue flowers. Echium has been introduced into North America as an ornamental, but here is a word of warning. Echium is counted as an invasive plant in Washington State. Lavender will grow on sandy soil with a slightly alkaline pH.