Can Plants Die of Old Age? – How Some Plants are Immortal 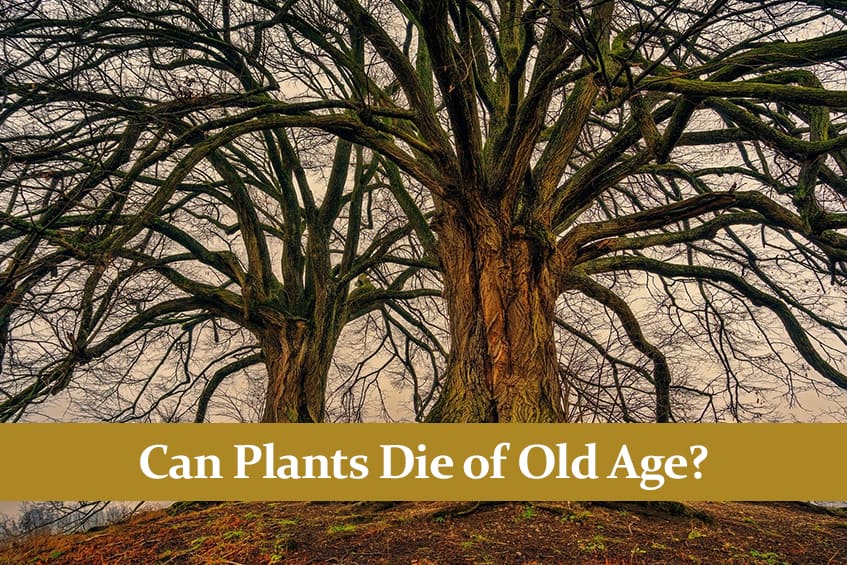 As we all sadly know, life eventually ends for all living beings. Plants, however, are less cut-and-dry than their animal counterparts in that if left alone and under the right conditions, some can live for what seems like forever.

The reason animals, like ourselves, die eventually is because our cells do not divide forever nor do they have the capacity to.

In fact, the more times our cells divide, the more vulnerable we are to mutations that could be harmful for our health in the long run. For plants and some organisms such as hydra, there is no senescence or “planned cell death”.

Senescence occurs when proteins such as telomerase fail to maintain the length of telomeres in DNA sequences, leading to some of our DNA eroding over time and leading us into maturity.

For plants and other organisms whose DNA does not erode in this fashion, they are more likely to live for prolonged periods of time.

What Plants can Die of Old Age?

Different types of plants bloom in different periods of time, and this can help us try and understand what their lifespan will look like.

The three different types of plants are the ones that are annuals, perennials, and biennials.

Expecting a plant that is annual or biennial to continue to bloom year-round and live forever is unrealistic and most likely impossible. For example, the cannabis plant is an annually blooming plant and typically flowers just once.

Some growers attempt to cheat the life cycle of this annual plant by forcing it to bloom as a perennial would, several times over several growing seasons. However, not letting plants reach their natural death comes at the cost of having the plant suffer and struggle to bloom again when it is against their hereditary code to do so.

What results is a sad plant that will never bloom in the same way or as magnificently again. In other words, the plant has reached its peak and is from now on in decline.

The plants that have the clearest shot at acting as something “immortal” are perennial plants, such as trees and bushes (like outdoor jade plants) that continue to sprout over long periods of time.

There is evidence to suggest that plants and trees that are planted closely together and share a root system, such as the Pando tree colony in Utah, live longer because they have the surrounding support system of other plants.

In regards to Pando, the grove of aspens is a single organism in that many of the trees that reside there are genetically identical, adding to the likelihood of these trees sticking around.

This would make “The Trembling Giant” as it is known the longest living organism on Earth and would be the closest plant we have that could be considered “immortal”.

Furthermore, each plant becomes dependent on one another and therefore works for the benefit of the colony; there is even some evidence suggesting that trees planted close together, even when different species, develop relationships that start in the roots and lead all the way up into the crowns. Some scientists cleverly call this the “wood-wide web” or otherwise known as “mycorrhizal networks”. Mycorrhizal networks are the root tips of trees joining together to form a working, communication-based relationship.

They are able to warn each other with distress signals and help each other. This is directly seen when trees that have been felled; sometimes after hundreds of years they can be found to still be alive because the surrounding root support system has nourished it while it was distressing.

As evidenced by the Pando aspen grove, asexual organisms have the extraordinary ability to regenerate, whether it be by healing itself or cloning a whole new plant with identical DNA (which often happens when a plant feels under pressure).

It has been considered a defense mechanism in order for the plant’s hereditary lineage to live on even when the original plant cannot, but it can also be described in advantageous terms in that the tree is asexually reproducing in order to hopefully add to the root support system, and that the offspring that results can contribute to the overall health of the colony.

However, “immortality” does mean “untouchable” or “undamageable”. It simply means that these organisms age slower than others and have a delayed natural cell death due to several factors (proteins at work, root support systems, and cellular division). However, this does not protect from outside viruses, diseases, and bugs from wreaking havoc on organisms and ecosystems.

Asexual beings pass on genetically identical DNA when they reproduce or clone, which means that there is little to no protective biodiversity to protect from the ravages of nature.

If one disease is found to significantly hinder the life cycle of one tree, it is most likely that the rest of the aspen trees in the colony would follow into decline as they are susceptible to the same kinds of things that could potentially lead to plant death.

Scientists believe they have found one of the oldest, stand-alone trees alive in “Methuselah”, the Great Basin bristlecone pine.

This particular tree is protected not only by its hard, sturdy wood but because its location is a secret – all that is known about it is that is resides in the White Mountain range of eastern California and has been recorded at surpassing 4,765 years.

This tree is around 1,000 years older than any other bristlecone pine in the six states that it resides, with only one other tree recorded in human history older than it is known as “Prometheus”. Prometheus was cut down in 1964 by a student studying climate change in Great Basin National Park and was confirmed to have lived nearly 4,900 years.

If it had not been cut down, it could have been alive today. While asexually producing plants divide at a high rate due to having all the genetic codes it needs, there is new evidence that illustrates that the bristlecone pine and its “quiescent center” in plant meristems (plant tissue found growing at the tips of roots).

At this place, cell division is slowed and could be the answer to why the bristlecone pine has managed to live for so long on Earth: every time a cell divides, it runs the risk of mutating its DNA (which can be beneficial or harmful depending on the kind of mutation and outside environments).

By avoiding cell growth and division, these trees are able to sustain their health outside of external factors (such as being hit by lightning).

Additionally, by living at a slower pace the tree is able to add onto its longevity. Perhaps this type of tree is not “immortal” by our standards, but it is considered somewhat “biologically immortal”.

“Biological immortality” does not refer to the ability to stay the same age and never die, but refers to things that grow with no finite life span (or, at least one that has not been recorded and studied yet).

When trees become damaged by external factors, they can compartmentalize the damage and seal it away from any further harm by growing around it to prevent infection.

As trees age, they can no longer compartmentalize in the ways in which they used to and growth slows down, much like how the bristlecone pine does in order to increase its longevity.

Things as simple as the weather can eventually wear down the bark of trees and damage the phloem and xylem channels, which helps to transport nutrients and water from the soil and roots to the top of the trees’ leaves.

Some plants, such as redwood trees, can grow infinitely with no limit in which their genetics tell them to stop (the literal version of trying to “touch the sky”). While the exterior, above-the-ground areas of the tree age and are subject to weathering and general damage, the roots hold populations of stem cells in which new growth stems from.

These stem cells remain youthful for a long time and are facilitated by the fungus that connects roots underground. These stem cells may hold another piece of the puzzle when it comes to determining which plants can “live forever” because they are naturally functioning against old age and deterioration of the plant.

Is My Plant Dead or Dying? How Can I Tell?

The most common signs that a plant is dying are as follows: wilting leaves, brown or burnt-looking spots, changing leaf color, block dots, flower buds falling off before ripe, roots coming through to the surface or through drainage holes, and/or the plant or soil not holding water or too much water.

You can check for drought or over-moisture by sticking your finger into the soil up to your first knuckle. If the soil is too dry or too wet, you should be able to tell. Another reason houseplants often die is that they become root-bound, fill up their pot to the point where they are no longer able to grow, and the soil becomes hydrophobic.

“Hydrophobic” soil allows the water to sit on the surface but not be absorbed into the soil, which can cause the plant to be malnourished and reach an early plant death.

Ironically, an abundance of sprouts may also be a tell-tale sign that the plant is suffering and is trying to procreate so that while the original plant has a chance of dying there are more chances of a new, healthy plant taking hold.

Even with all of the risks that come with having houseplants, most of the time they are salvageable and can come back from the brink of death due to their reproductive properties under pressure.

Even though they may not be “immortal”, getting houseplants to live longer than you is definitely possible – you may even live to see them reproduce and watch the offspring plant grow.

I am a passionate gardener. I am growing my own plants at home and in a small garden for about five years now. Here on this site, I am sharing all my knowledge and more for everyone who is interested in gardening! I hope you enjoy my site and I hope you find it useful. Here is a link to the full bio of the author if you want to know more: https://greenthumb-central.com/about-valentin/